Southern Japan revels in their insect devastation. The supermarkets seem to hold host to a wide variety of poisons, traps and sprays designed to cause insects a breakdown in their existence. On a recent shopping trip there amongst the cockroach neutralisers and fly drowning systems I noticed a box of ant bait, lovingly packaged with depictions of ants dragging said pellets of poison into their nest, effectively murdering their own queen. I was intrigued. Ant bait that is taken inside the nest by the ants themselves, and distributed as if it were their usual nourishment. I had to investigate further, and as I did the similarities between the workings of the human brain and the running of an ant colony came more into focus. Bear with me here:

"...Most fire ant bait is an insecticide and an attractive fire ant food (generally processed corn grits coated with soybean oil) combination. Baits are taken into the colony by ants searching for food.

The bait is distributed to other members of the colony through the exchange of food known as trophallaxis. One key to the efficiency of baits is that the insecticide gets to the queen. Although several fire ant baits are available, there are two main types: insect growth regulators and actual toxins. Hydramethylnon bait is a toxin (slow acting stomach poison) that disrupts the ant's ability to convert food to energy. Spinosad bait is a slow acting biorational toxin derived through the fermentation of a soil dwelling bacteria.... Fenoxycarb, Precor or methoprene, and pyriproxyfen are all insect growth regulators that prevent queens from producing new workers..." - link

Fascinating stuff indeed, but what's this got to do with brains?

The ant colony has a lot in common with the human brain. From the simple, rule lead interactions of the ant with its environment; ants with other ants; ants with food sources, an incredibly well organised and highly complicated pattern of behaviour can emerge. Science dudes call this an emergent property, basically the complex arising from the simple. Here are just some of the complex things ant colonies can do:

There is no central control issuing orders over the colony (the Queen is in fact the dumbest member of the nest) and yet incredible behaviour, and even some aspects of conscious awareness emerge. If some of the scientific data linked above is anything to go by then some colonies can understand, can learn, can possibly even grow and mature as a single entity or neural network, sound far fetched?

"Incredibly complex systems turn out to be governed by few and very easily comprehensible rules, where the complexity is totally invisible until the system is examined as a whole.

Compared to the human brain, the neural network of an ant is extremely small. Ants have 10,000 - 100,000 neurons depending on the species. Yet these small neural lumps, communicating using very simple methods result in this complex phenomenon that is the living, learning, growing ant colony.

...A big ant colony may have all in all 500 billion neurons (5 million ants with 100,000 neurons each). This is about 5 times as much as a human brain (which has about 100 billion neurons), but the neurons in the ant colony are all but isolated in the individual lumps of up to 100,000 neurons that are the individual ants. Studies of E. O. Wilson in the sixties showed another ant species, so-called fire ants, to have about 10 signs in their "language". So while this interaction is what allows for the emergent behavior of the colony, the limitations in the interactions is what keeps it from showing even more complex behavior.

The human brain on the other hand is highly interconnected. Neurons in the brain are cross linked and interconnected within the whole system. An average neuron is linked to a dozen others, some to thousands. The neural connections are over the neuron's so-called synapses, to other cell's receptors or so-called dendrites. It is estimated that there are 1 quadrillion synapses in a human brain. That's 1015 or 1,000,000,000,000,000." - link + another

Taken in this way the human brain is nothing but an elaborate neural colony, each neuron an ant, each pathway a trail of scent, each portion of the brain a different sub-system of the colony at large. Let's hope that ants don't expand on that 10 signs of language, or we are in deep kakka!

So where do the ant pellets come in?

Disguised as nourishment the pellets are dragged nest-wards by the ant, (the neuron) and inserted into the colony (configuration of the brain). Is this not a good metaphor for drug taking? 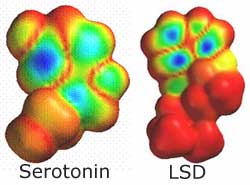 Some hallucinogenics (LSD) mimic the chemical structure of serotonin, fooling the brain into operating in various alternative configurations. LSD is distributed throughout the brain, simply because of its similarity in chemical structure to serotonin. Other drugs (MDMA) effectively 'uninhibit' the supply of serotonin to the brain, giving users the characteristic high associated with the drug:

"As with all neurotransmitters, the actual effects of serotonin (5-HT) on the human mood and state of mind are very difficult to ascertain. One way of understanding it is through the use of MDMA, which is thought to cause a mass release of 5-HT, possibly by drawing it back through the transporter....

5-HT receptors are also used by other psychoactive drugs, including LSD, DMT, and Psilocybin, the active ingredient in psychodedelic mushrooms." - link

...and taking the metaphor further some poisons and pharmaceuticals act on neurons individually, shutting them down and/or blocking their effects on the brain/neural network/colony.

Anyway, just an idea. Can anyone else think of similarities? What do you know about drugs and how they intimately effect the workings of the brain? of consciousness itself? Are you against the idea of brains as highly advanced ant colonies?

This article reminded me of a few things... and I'm a huge nerd so I'll share them with the huge entity to make it even HUGER!

on drugs:
I remember watching an interesting documentary on chaos theory in high school that talked about how energy fluctuation and rhythm have a lot to do with how some drugs affect our bodies. Usually, the heartbeat and breathing rhythms are steady and set, while our brainwaves are completely random. Cocaine changes this pattern so that heartrate and breathing are made chaotic while brainwaves become very normative and predictable. Le bizzare, no?

on ants:
if you're wowed by ant social structure, you should look up some info on leaf-cutter ants. They have really complex social structures based on what you noted as a symbiotic relationship with a strain of fungi (they take little pieces of THEIR colony to build new ones when they move, so the same species evolves along with the ants' behavior). They also have specified jobs for each age class (of which there are four main castes and many other sub-castes ranging from "garbage ants" to "fungi farmers" to "defenders"). Anywho, I think they're neat... check this site if you think so to.

Thanks for the great comment, as always Jenny, I'm off to peruse some ant related goodness in a mo...

The cocaine/body rhythm info is very interesting. It fits perfectly with the idea that the lines between consciousness and reality are somehow disturbed by drug taking. I like the idea also of the universe as rhythm. Forgiving any pseudo-science nonsense I might spurt here, I like to think of music itself as one aspect of consciousness versus the rhythm of reality.

Space-Time can be understood as being broken up into separate packets of 'stuff'. The smallest of these being somewhere at the Plank scale.

If Time's packet is distinguishable as one beat of the universe then our perception of that time has a lot to do with our reality. We cannot perceive the smallest measure, but just as our eyes turn the flickering image of a TV screen into a continuous stream of perception so our consciousness could turn the packets of time into a seeming stream of conciousness. Drugs may disrupt the brain in such a way that these packets are moulded together/split apart somehow. I dunno.

There is a lot of stuff out there on consciousness bridging time, if you browse through my links section there are some aricles on it.

Does this sound weird? Anyone who has taken drugs (cough cough) will testify differently as to how it affected their perception. I'm love to know if my experience is a share one.

Wow, that's a really interesting way to look at it. I remember being boggled in said mathematics class in high school when my teacher said that even the most perfect of circles are made up of infinitessimal rigid angles, because nothing exists without some basic unit, as you said. So far there are just very complex and seemingly arbitrary ways of correcting for an ABSOLUTE measure of time, but maybe there's something more definate lurking out there.

And the time/drug thing... that was perhaps the one thing that really made my first drug experience so surreal. I remember not having any sense of time and simultaneously appeared perfectly normal to everyone else (when in actuality my conscious mind had no clue what I was doing!). Reality, what a trip!

if you wanna read about lots of drug experiences and such things, check out erowid.com