The Holographic, Evolving and Self-Realising Universe 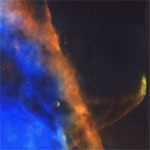 "UC Berkeley physics professor, Raphael Bousso, is trying to break down the mysteries of the universe with a concept called the holographic principle. Physicists stumbled on the idea while studying black holes. It is a concept, which ultimately questions whether the third dimension exists.

"There's a real conflict between the way that we're thinking about the world right now, which is a very local way where everything happens independently in different regions of space and the way that we're going to have to think about it," said Bousso in an interview...

....The holographic principle uses the optical concept of holograms to try to visually explain the complex idea. Holograms are most often used on credit cards and are images that look three dimensional, but they exist on a two dimensional surface...

...The discovery ultimately says the concept shows the third dimension could be an illusion because complex calculations can't prove it exists. The recognition is a step of progress, but Bousso doesn't know where it will ultimately lead." - link

I'm struck by the beauty of this idea, and its recent surge in popularity. What amazes me the most though is how echoes from Philip K Dick's late works keep resonating around these principles. You may think Dick was a genius, you may think he was insane (especially in his later life). I'm starting to think he knew something we don't:

"As to our reality being a projected framework -- it appears to be a projection by an artifact, a computerlike teaching machine that guides, programs, and generally controls us as we act without awareness of it within our projected world. The artifact, which I call Zebra, has "created" (actually only projected) our reality as a sort of mirror or image of its maker, so that the maker can obtain thereby an objective standpoint to comprehend its own self. In other words, the maker (called by Jakob Bohme in 1616 the Urgrund) is motivated to seek an instrument for self-awareness, self-knowledge, an objective opinion or appraisal and comprehension of the nature of itself (it is a vast living organism, intrinsically -- without this mirror -- without qualities or aspects, which is why it needs the empirical world as a reflection by which to "see" itself).

It constructed a reality-projecting artifact (or demiurge; cf. Plato and the Gnostics), which then, on command, projected the first stage of the world we know. The artifact is unaware that it is an artifact; it is oblivious to the existence of the Urgrund (in terms that the artifact would understand, the Urgrund is not, rather than is), and imagines itself to be God, the only real God.

Studying our evolving reality, the Urgrund more and more adequately comprehends itself...." - link

For the moment let's forget the common use of the word 'God' here. It's meaning can be whatever you want it to be... Dick is not only matching some of the aspects of the 'holographic principle', but actually furthering them. In his ponderings, this reality is a projection from an artifact which in itself is only a copy of a higher level entity. We thus perceive only a projection of a copy, a simulacrum of the simulacra.

Dick also alludes to another favourite pseudo-science notion of mine: the evolving universe.

If our reality is in some sense a 'holographic projection' of a more substantial state then as science uncovers this theory so it is beginning to lift the veil which hides truth.

"The nature of things in the habit of concealing itself..." - Heraclitus

Could it be that our self-reflexive consciousness, in its evolution, is part of a higher function - that of fully realising the universe? Complexity through evolution is important because it fights with entropy (although entropy is sure to win in the end): 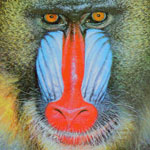 The gas from the big-bang has coalesced over countless millenia to a stage where it is now able to perceive that it once was inhert gas in the first place! Let's go a bit Kurzweillian here and postulate that this increase in cooperation and complexity will continue exponentially. Human manipulation of AI systems, nanotechnology and genetics could, in theory, produce whole reams of new forms of conscious complexity. At the fundamental level nano-machines could interact even semi-consciously with one another to mould base-matter into yet more computational, self-reflexive devices. In this view the universe is engineering itself a way to fully realise its nature.

We now perceive a level of reality strictly removed from that of a cloud of hydrogen, a star system, a vat of amino-acids, an amoeba, a beetle, a mouse, an ape and through this evolution in the complexity of the universe's perception of itself reality has come more into focus.

The hologram is being deconstructed, for what end I dare not posit, but I'm more than glad to be along for the ride...

Definitely check out some Philip K Dick if you haven't before, many of his essays concerning the nature of things can be found in:

and more on his life here...

And for a glimpse of what cosmological evolution could mean for the future of reality PLEASE read my all-time favourite science fiction book:

Click around the article above and the tags below too, you never know what you might find.