Autism, Reality and the Flooding of Minds

A minority of people with autism have one or more extraordinary intellectual talents, such as the rapid ability to calculate the day of the week for a given date, or to count large numbers of discrete objects almost instantaneously - they're often called 'autistic savants' or 'idiot savants'. Now Allan Snyder and colleagues have shown that by placing a pulsing magnet over a specific area of the brain, these kind of abilities can, to some extent, be induced in people who aren't autistic...

...The researchers think that by temporarily inhibiting activity in the left anterior temporal cortex, the TMS allowed the brain's number estimator to act on raw sensory data, without it having already been automatically grouped together into patterns or shapes. In other words, they believe it caused the 'normal' brain to function more like an autistic 'savant' brain. We argue that it removes our unconscious tendency to group discrete elements into meaningful patterns, like grouping stars into constellations, which would normally interfere with accurate estimation, the researchers said. By inhibiting networks involved in concepts, we may facilitate conscious access to literal details, leading to savant-like skills. - BPS Digest

Once again, it is the restrictive capacity of the human brain, rather than its ability to augment a world from nothing, which has captured the science headlines. The valve of consciousness, in the experiment mentioned above, has been loosened somewhat, bringing the flood of reality closer to the brink of its perceiver. Is it possible that by studying autism, and other such neurological 'disorders', the boundaries of the human can be better mapped out? There is more to us than sheer consciousness:

People with autism seem not to daydream in the way that other people do.

When the minds of non-autistic people are "idle", a network within the brain involved in social and emotional thought is, in fact, active. People often drift into daydreams at these times, but when we have to concentrate on a task, we suppress daydreaming.

A team from the University of California at San Diego used functional MRI to show that while this network is more active in non-autistic people when their brains are resting than carrying out a cognitive test, there is no difference between the active and resting brains of people with autism.

"The absence of this activity in autism might mean that they have a different sort of internal thought," says co-author Daniel Kennedy.- A recent forum post on this topic

Whole worlds ebb out from our conscious and subconscious minds. How strong is the dam which stems the tide?

In his classic book of neurological investigations, 'The Man who Mistook his Wife for a Hat', Oliver Sacks tells us a story of two of his patients, twins labeled with the idiom of the day as 'idiot savants'. Their infamy stretched far out from Sacks' examination room, into a society fascinated by the bizarre, the unique and indefinable (their story, along with that of another famous autistic Kim Peek, is said to have influenced the movie Rain Man). The twins lived a life of numbers, intrigued by infinities, playing with primes, all the while reveling in their personal universe together, as if conspirators in a mathematical mystery the rest of us would never comprehend. In pondering their mystique Sacks gilds their tale with melancholy: 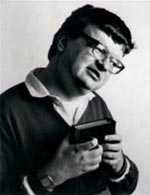 The twins live exclusively in a thought-world of numbers. They have no interest in the stars shining, or the hearts of men. And yet numbers for them, I believe, are not 'just' numbers, but significances, signifiers whose 'significand' is the world.

They do not approach numbers lightly, as most calculators do. They are not interested in, have no capacity for, cannot comprehend, calculations. They are, rather, serene contemplators of number - and approach numbers with a sense of reverence and awe. Numbers for them are holy, fraught with significance...

...such an arithmetic, in minds like the twins', could be dynamic and almost alive - globular clusters and nebulae of numbers whorling and evolving in an ever expanding mental sky... - link

By instilling such mysterious 'powers' on the minds of healthy people perhaps we are diminishing exactly what it is we are trying to understand. The world of chaos, ever multiplying changes of form and void, appears to be stemmed from bursting in by the vagaries of our consciousness, yet this is no mere 'dulling down' of reality. By controlling our perceptions our brains allow new landscapes of thought to be painted as inner worlds. The twin savants in Sacks' tale may be able to dance amongst the base forms of existence, but to them a poem in 5 - 7 - 5 structure is devoid of beauty, a musical composition in 2/4 time is a mere collection of patterns which they revel in factoring.

Perhaps in restricting the objective world the human mind is capable of enriching the inner subjective self, and in doing so, places forever hidden from view the original source of our greatest accomplishments.

The subjective selfhood is not about to be seen on an MRI scan or by flashing a TMS wand over our scalps, yet perhaps it is in this abstract realm where we most differ from the autism 'sufferer'. Our "unconscious tendency to group discrete elements into meaningful patterns" is where art is born. In those mental "networks involved in concepts" the seeds of civilisation were grown. Restriction is the key to complexity.

We should not look upon the autistic as tools with which to better understand ourselves - both our worlds are as distinctly complex and abstractly real as each other; both our realities are valid universes we have barely begun to explore.

The key thing here is, there is a reason we're locked off from these abilities.

It's like root access on a computer, or the keys to the nuclear arsenal. You tread in those territories carefully, or you get burned.

In the case of the human brain, some of our low-level systems are out of our control because controlling them might be fatal. Example: autonomic systems like thermogenesis, heart rate, and breathing, and sympathetic/parasympathetic systems like endocrine.

Even relatively benign things like perceptual filtering are part of what keeps us sane.