A Brief History of Old

Tuesday, December 05, 2006 → by Robokku
Feast your brain on these aged items, ordered from least to most old!

Age: 66 years
Title: Bernie Barker
Description: Bernie was still auditioning for TV appearances last summer, albeit unsuccessfully. A former working-class, hands-dirty sort - an electrician or something - he has an interesting career history, and probably a long one. 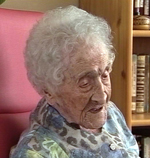 Age: 122 years 164 days
Title: Jeanne Calment
Description: The usual stories of bizarre longevity tips and a sense of humour that stuck it out to the bitter end surround reports of Jeanne. Some of her jokes sound suspiciously like the onset of senility, but the same can be said of many leading stand-ups. Her prolonged attempt at immortality, lasting roughly 0.122 millennia, was said to be a personal best.

Age: 1541 years
Title: A Questionable Ornament
Description: Some guys found a thing and said it might be chess piece. Many others said it probably wasn't. Why did I include this?

Age: 4046 years
Title: A Cuneiform Tablet
Description: Not to be confused with Vanguard 1, above, this is the oldest that ever went to space and came back again. In 1989, Sonny Carter, spaceman, packed this in his space-luggage on the space shuttle Discovery and set off into space. He did so as part of NASA's "Object in Space Program". The programme was a success and the object did indeed go to space. I wish I had lived in the US so I could have contributed taxes to that one.

Age: 4206 years
Title: Burial Treat
Description: The oldest cake ever found was made in ancient Egypt and allegedly "vaccuum-packed", although I feel the term is probably misleading given the technology available at the time. Anyhow, sounds tasty, and I'm sure the revered Pepionkh would have loved it had he not been already dead when it was presented to him in his grave. What a waste.

Age: 1,800,000 years
Title: Caveman-type Hunter
Description: The earliest evidence of mammoth consumption was left behind by some messy, probably monkey-like humanoids in the Olduvai Gorge in Tanzania. It's the kind of place that makes archeologist soil their trousers (by kneeling down to brush fossils). 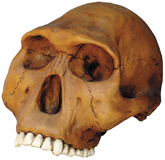 Age: 4,400,000,000 years
Title: Zircon Lump
Description: The oldest bit of our planet yet found. Want to know about Zircon formation? Sure you do - click the picture. 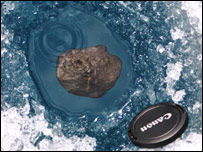 Age: At least 4,600,000,000 years
Title: Super-Aged Rock
Description: This is what prompted the post: last week it was announced that a bit of meteorite in a lake - not itself a new discovery - was older than the solar system. And that makes it pretty old. Click the picture for the Guardian's report.

The info on this page is old!

Where did you take that meteorite picture from? It just looks like a 3D render to me... :-)

The Baby August gestation entry at the top is a fake. (Check out some of the other slides after clicking on the picture and you'll see it's a humorous slideshow about the medical staff)

Hmmm... so it is. My apologies. And I was so pleased with the picture I made.

As for the meteorite picture, it's from the BBC, but I saw the same picture in the Guardian newspaper. It does look like a render, but I don't think it is.

Even though the person who "invented" or "discovered" the carbon dating method says it's not reliable after about 6-10K years.

So how are they dating things older than that?

When using radiometric dating to date rocks, carbon 14 is not usually one of the elements that is used to date the specimen. Potassium 40, rubidium 87, thorium 232, uranium 235 & 238 are used instead. The ability to date into the billions of years + are possible with these elements. Carbon 14 is mostly used to date organic specimens.