by Daniel Rourke
The Huge Entity 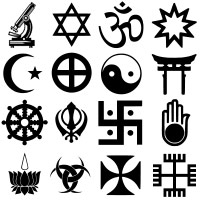 In an alternate-future reason has won an imaginary battle over faith. The relevant mysteries composing religion have been torn from the arms of their ancient idols; the sun is setting on an illogical world and rising over a new Eden, green with a luscious pasture Darwinian processes have steadily provided. But this Godless world is a mere illusion, made vaguer still by the naivety of our humanist convictions. There is a 'God-shaped hole' within each of us, a passageway to a future not devoid of religion, but soaked to bursting with it. In 50 years from now science may have described religion, but it won't have succeeded it - in fact, religion will be more prevalent than ever.

The vigor with which atheism's new prophets expound their rational brand of faith is admirable. In a society governed by scientific knowledge no theistic principle should be allowed to pass by unquestioned. The political rhetoric of 'traditional' believers such as George Bush and Tony Blair emerges from a religious inheritance which has forgotten its roots. 'The Fall of Mankind', made so resolute in the scriptures, has been largely disregarded, in its place arising an absurd utopian ideal of man's dominance over the forces of nature - many of the darker aspects of which reside inside mankind itself. Funnily enough, this twisting of Judaeo-Christian ideologies is a consequence of scientific humanism and not a modern maladaptation to its emergence. That man is somehow flawed is rarely excepted wholesale in today's progress-obsessed society - each of us, according to the rhetoric of the global village, is a blank slate onto which adaptive society may inscribe its greatest accomplishments. Our nature may yet yield the flaws in each of us, that is if science via humanistic values cannot wipe our slates clean first.

That the main undercurrent of mythology tying our cultures together can still be traced back to a handful of conflicting texts first given form some 2 or 3 millennia ago is surely proof enough of the ability of religion to out-last most other forms of cultural change. Evangelical scientific thinkers such as Richard Dawkins, E. O. Wilson and Sam Harris expound the belief that in time science, and the rational systems which scaffold it, will wash the slate of the human so clean that a completely secular universe may be inscribed on its surface. This is by no means an original doctrine - finding its roots in the post-Darwinian philosophies of the enlightenment - one rooted in an egocentric arrogance obliterated only by its sheer naivety:

...The New Testament writers are seen as afflicted with a false consciousness rooted in their time, but the analyst takes the consciousness of his time as an unmixed intellectual blessing.

- Peter Berger, A Rumour of Angels

Cliched as it is to label science as a religion in its own right, one must not ignore the symbiotic relationship between the two. The mystery and reverent awe the secular citizen gains from witnessing the wonders of the universe may be better rationalised and far more complex than a similar awe felt for God's divinity, but at base both are self-centric reactions to an omniscient figure-head. Where the atheistic thinker differs from his theistic counterpart is in how that figure-head is composed: is it an ever present Deity, or an ever present Science?

But whereas The Good Father can do no wrong, science is the God and the Devil of its own mythology. Instead of rejecting religion as a poisoned byproduct of our nature, perhaps we should be feeding the mythology of science with all the sustenance it needs to fill up that hole within each of us. Rebellion against all forms of theism fails to credit the miraculous stronghold which Judaeo-Christian ideologies have over our secular belief systems. To break free of the shackles of monotheism, secular society must consciously construct a truer kind of Atheism, one which adheres to the word's strictest definition: that is a Godless Theism.

Humanity is a fickle species, prone to all manner of internal shifts; a creature able to live in constant conflict with itself and see only those steps ahead allowed by its current dictum. To reject religion is to reject ourselves, wholesale, and in the process deny the soothing potential of the miraculous, of a divinity in any number of forms. In 50 years from now mythology will play a greater role in society than it does today, not because we will have reverted to our former naiveties, but because we will have become capable of embracing our inconsistencies and using them to construct an ever emergent existence; one aware of and in control of its inherent conflicts.

Browse here for a better conception of non-possible futures...

I may post a more indepth comment later, but... If you haven't try to see a newish episode of South Park. It is about the future, atheism, and Dawkins.

Btw, I had fun with your time capsule project. These kinds of things are great fun!

Thanks Dan, glad to know you enjoyed it - me too!

I'd like to get things like this feature up and running more often. I am a big fan of the 'Carnival' scenes which many bloggers write into, but I'm not sure they have enough inherent drive of their own to create new ideas and ideologies.

Wouldn't it be nice if all the internet blogging that goes on, much of it vry well researched and written, could find a home in some sort of 'Blog Magazine'? Perhaps this scene exists already and I don't know about it, perhaps that's reason enough to do features like this and rope bloggers in by the neck.

What do you think?