On the Nature of Seeing and The Act of Creation

There are things which by their very nature are so dependant upon human caprice that they either exist or do not exist as soon as we desire that they should or should not exist... Humankind is almost pure potential as it emerges from the formative hand of nature. Humans must develop that potential and complete their formation... in brief, humankind must... be its own second creator.

For the present we can say that creativity is not only the fresh perception of new meanings, and the ultimate enfoldment of this perception within the manifest and the somatic, but I would say that it is ultimately the action of the infinite in the sphere of the finite – that is, this meaning goes to infinite depths.

Perspective makes the single eye the center of the visible world. Everything converges on to the eye as to the vanishing point of infinity.

In man creature and creator are united: in man there is matter, fragment, excess, clay, mud, madness, chaos; but in man there is also creator, sculptor, the hardness of the hammer, the divine spectator and the seventh day...

~ Friedrich Nietzsche, Beyond Good and Evil

"This circle;" he said, "which the blotter has made into a point invaded by night, is God." ... "An accident," he said, "may suddenly transform the infinite into infinite worlds whose interrelation we cannot define, but which we nevertheless sense."
...All other life ceases in the life put into words.

~ Edmond Jabes, The Book of Questions : El, or the Last Book 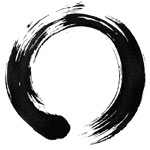 On the Nature of a Multitude...

Labels: On the Nature of

why is it so difficult for people to see that we are the gods who create the world?
is it something in the water?

no, it's more like something in the 40+ hours a week that people work. after that it's time for consumption of goods, services, and entertainment.

what ever is left over goes to the kids.

the water has nothing to do with it.

Enso? Ouroboros? Is there a difference?--

Cheers. (I love The Huge Entity)

Thanks for your comments!

Here's what Wikipedia has to say on Enso:

"Enso (円相) is a Japanese word meaning "circle". Enso is perhaps the most common subject of Japanese calligraphy. Enso symbolizes enlightenment, strength, and the universe, and is an "expression of the moment".

It is believed by many that the character of the artist is fully exposed in how he draws Enso, and that only one who is mentally and spiritually whole can draw a true Enso. Some artists will draw Enso daily, as a kind of spiritual diary."

I like the idea that this 'expression of the moment' is characteristic of the calligrapher themself. This is very much how I perceive reality as a whole. I don't ascribe to any religious doctrine, and to be honest I find matters of spirituality most interesting from a severe materialistic point of view, yet where much Buddhist ideology is concerned I can find no greater expression for my sense of existence.

The idea of Ouroboros, although quite different in texture to Enso, certainly does share some of its qualities. Infinity feeding endlessly back into itself in autopoietic function. Doesn't our perceptions control our reality which in turn feeds our perceptions?

Another nice little self referential thought or two...

How are we the gods that create our world...?

We didn't create water. Who did?
It just magically created itself, right...