"...I received from Oxford the manuscript you have examined. I lingered, naturally, on the sentence: I leave to the various futures (not to all) my garden of forking paths. Almost instantly, I understood: 'the garden of forking paths' was the chaotic novel; the phrase 'the various futures (not to all)' suggested to me the forking in time, not in space... In the work of Ts'ui Pên, all possible outcomes occur; each one is the point of departure for other forkings. Sometimes, the paths of this labyrinth converge: for example, you arrive at this house, but in one of the possible pasts you are my enemy, in another, my friend. If you will resign yourself to my incurable pronunciation, we shall read a few pages."

~ Extract from 'The Garden of Forking Paths' by Jorge Luis Borges

Time has an inordinate power over the self. Of every moment I perceive there is a previous lifetime of experience which orders the perceiving. To make sense of my causally-extended identity I must carry around with me a subconscious map which, if followed, would glide a path back through my life in reverse order. A map which is drawn at each turn I take in the road; a map with an infinity of editions, the alternate outlines of which give my selfhood a structure.

Each of us is composed of an inner voice, perhaps the logos of consciousness, which instinct tells us is our 'self'. The writer, in composing a work of narration, must be aware that they project their inner voice into the mind of their reader, thus in an abstract sense, seizing control of another's selfhood. Whilst the reader follows the causality of the words it should be possible to shift their sense of time; to break the constraints of external reality. Fiction is capable of defining causality. The logos of word is indistinct from the logos of thought.

My ponderings at The Huge Entity have little attempted to offer up any aspect of a selfhood, whether anchored in time or otherwise. This inherent disconnection from the identity of my words allows me a certain freedom to dwell on ideas without fusing them to particular moments or events in my life. What I have come to realise though is that by letting the website meander I have given it a time-independent power quite unlike that inherent in 'traditional' narratives. The book, the article, the movie - even recorded speech in many senses - observes a linearity much like that of perceived time. Of course, fiction has found many ways in which to play with the linearity of the narrative itself, but when we come to read the book, to view the movie, to listen to the interview do we not follow predefined paths? 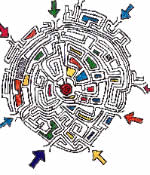 There are no forks in the road in most forms of narrative. The internet is in the process of changing that.

Click a link or two and enter
The Logos Labyrinth...
Just as my self is multifaceted; is tree-like in its composition, so the internet - even in its present, infant form - allows conscious intention to dictate the narrative of the logos. I now perceive myself in a world, but I also make sense of that world through my self - a self with many forking paths in a world of infinities. Long live the anti-linear Logos! Long live the internet!