Tuesday, April 18, 2006 → by Danieru
What's the coolest way to stretch the vageries of conscious perception to their absolute limits? How about the detection of elementary particles so weakly interactive that most can pass straight through the entire planet Earth without a blip?

Welcome to the world of Neutrino detection: 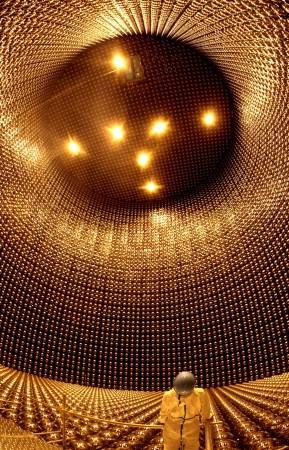 Whilst you comprehend the sheer scale of Japan's Super-Kamiokande detector (set to go back online again in the near future) consider this:

For typical neutrinos produced in the sun (energy of a few MeV), it would take approximately one light year (~1016m) of lead to block half of them.

Around five million neutrinos pass through every square centimetre of your body each second, though we are neither aware nor harmed by them.

Super-Kamiokande contains around 50,000 tons of water from which the interaction between 1 neutrino and 1 quark must be gleaned.

Neutrinos generally go right through the earth unscattered, but occasionally one interacts in the Super-Kamiokande detector, typically striking a quark in the nucleus of an oxygen atom within a water molecule and snatching a plus or minus charge to become either a muon or an electron...

...Electrons are distinguished as they scatter and make fuzzier images, which can be recognized with about 98 percent accuracy. On average, Super-Kamiokande catches one atmospheric neutrino every 90 minutes.

Consciousness, it must be said, has got a whole lot more sensitive since its early inception...

The images are amazing, looks like a science fiction setting! WOW

(I'm not sure at all, I've understood fully it's function thought :) )

I'd like to see it full of water and all fired up, I bet it makes a hell of a hum!