Pi Transcendence, Conscious Assimilation and the Quest for the Ultimate Metaphor 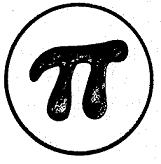 At the simplest level Pi (π) is the ratio of the circumference of a circle to its diameter, and at its most complex, it is an irrational number that has an apparently random decimal string of infinite length.

In our base 10 representation of this transcendent number a glimpse of infinity can be uncovered. π is God; a God born of the universe's own metaphor for itself. Indulge me here...

The human mind is a conciliation apparatus, that is, a perceptive system able to assimilate stimulus and thus construct schema:

These mental schema exist as metaphor to the world your perceptive apparatus accesses. The objective, material reality we usually understand in terms of energy transference and atomic activity (at a micro level) has no relevance to the ebb and flow of your day to day conscious models of the world. Although, arguably, a physicist or mathematician may grasp these fundamentals in their working life, and even in their personal conceptions of reality, I doubt anyone would conclude from this that the mind states of such people represent the real world in clear, mirrored objective fashion. In truth atoms and the energies transferred are also mere metaphors for fundamental reality - all schema are.

These human-evolved mechanisms were very likely layered on top of previous systems we can still gain access to by examining the workings of our genetic relations. In the great ape species we find our closest assimilating cousins, but we should not for a moment think that the depth of our consciousness is a unique attribute of Earth's large brained mammals. The perceptive apparatus of the humble laboratory mouse can shed much light on our evolutionary origins, and pushing this metaphor of metaphors further still, superorganisms such as the fully functioning ant colony may give us the most accessible insight into the nature of our mental subsystems. 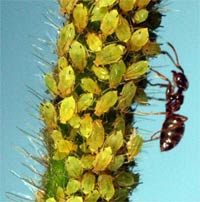 Whereas the activity of your brain occurs on a level too microscopic to yet be fully understood the workings of the ant colony is macroscopic. Every person who has watched the activity of these fascinating critters cannot fail to be overwhelmed by the depth of their understanding, when viewed holistically. Maybe you think understanding is a strong word to use here, but I would disagree. Studies have frequently shown that ant colonies can execute colony-wide decisions, can undertake complex tasks requiring the involvement of millions of discreet individuals. Ant colonies have even been shown to 'learn' from their past 'mistakes' and will develop more efficient mechanisms of repairing their colonies if they are attacked in a similar way on temporally distinct occasions. In many ways superorganisms such as the ant and termite colony appear conscious

(For further analysis of this concept and a better metaphor for the workings of these hive minds see my past post 'Ant Bait as a Metaphor for the effect of Drugs on Human Consciousness').

What interests me today though, following on from my brief definition of assimilation, is whether the human brain is capable of conceiving of metaphors existing in other systems. That is, can the linguistic power of the metaphor be ascribed to entities which appear to have no language with which to create them? I will get back to Pi in a minute, for the moment here's what David and Doris Jonas have to say about hive consciousness in their book Other Senses, Other Worlds:

What is the 'other way of knowing' by which the termites 'know' what they have to do and when they have to do it? Instructions cannot be brought to them quickly enough by messengers, since the distances within the hill are far too great. There is no perceptible means of communication that we can discover. Not rarely in nature, a group brain functions as an instrument for decision-making in a way startlingly like an intelligent brain. - link

Following from this idea it is no distant leap for us to claim that, like the human mind examined earlier, the hive-mind of the superorganism contains no absolute representation of reality with which it deconstructs the patterns in the world around it. Yet there is a sure difference in the acknowledgement you just made and the one (supposed) previously about the human mind. We can agree that both systems appear to exhibit forms of intelligence, learning capacity, self awareness even, but to assume that the ant colony can contain, assimilate and construct metaphors about the 'real' world! Nobody reading this right now will find that jump an easy one to make... If I had a heap more time myself I might examine the possible structure these 'metaphors', these schemas might have, but in true Huge Entity fashion I'd like to extend the symbolism of this idea a little and allow you (perhaps in the comments section) to ruminate over the nature of any such metaphors yourself.

(Check out more on our brains' reality assimilation here: Opening the Doors of Perception: Hallucination, Schizophrenia and Reality)

My knowledge of mathematics is at best limited, yet when I conceive of numbers I understand without much difficulty that they are in some sense transcendent entities. Is it not necessarily the case that the sky is blue, that cheese tastes good, that flowers bloom in spring. This learnt or contingent knowledge is a posteriori and the pre-existent form of knowledge, transcendent perhaps, such as 2+2 = 4, is a priori. It is not possible to conceive of a possible universe where 2 + 2 equals anything but 4.

Although in a sense all a priori knowledge is assimilated and given metaphorical identity by the brain (when you think of 100 do you really think of 100?) it is also possible to conceive of a priori concepts devoid of metaphor. 2 just is 2 and can only ever be 2. Any other schema you consciously try and develop for the number 2 would end up not representing 2 at all. Could these simple metaphors, in the form of a priori statements, be held schematically by the hive-mind of an ant colony? I believe so.

Now we get a bit crazy and greater and greater gaps are going to start showing in my meanderings here. However, I hope that what I have so far expelled is enough to have you conceive of metaphor itself as a somehow transcendent entity. The universe has been evolving ever more complex perceptive systems (such as the human brain) for 13 billion years now, weaving in their wake ever greater metaphors representing the universe which formed them in the first place.

(See more on this here: The Holographic, Evolving and Self-Realising Universe)

The complexity of the superorganism's consciousness, as manifested by the interplay of hormonal and physical interactions in the insect colony, is capable of minor assimilations of stimulus - building schema, or metaphors, symbolically detailed enough to sufficiently represent as much of the objective world as the colony needs to carry out its existence. This may include:


The complexity of your consciousness, as manifested by the interplay of chemical and electrical exchanges in your brain, is capable of awesome assimilations of stimulus - building schema, or metaphors, symbolically detailed enough to sufficiently represent as much of the objective world as you need to carry out your existence. This may include:

As you can see, even evolved assimilating systems as evolutionarily distinct as an ant colony and a human brain have much in common. However much you value the concept of the human soul it would be foolish to deny that in the simplicity of superorganism's 'consciousness' echoes of every aspect of your waking life ring back at you. The universe is a machine expert at evolving metaphoric apparatus, and as time rolls onwards so the systems which evolve from its structure gain ever greater and more complicated schema with which to map reality. And yet, in 13 billion years of evolution no system has yet come to exist which can build a metaphor PERFECTLY analogous to reality. In a sense, the universe's own self awareness is contained in the abundance of chaotic systems one can comprehend. Where human consciousness fails to grasp one aspect of working reality so another will bare closer resemblance to what I continue to call 'objective reality'.

Sure, in mankind we have systems which perceive the harmonies inherent in nature, whether that be the music of birdsong or the flickering splendor of photonic light as it catches on the wave tips at the sea shore. BUT (and as you can see it's a big 'but') no human has awareness of the beauty of the ultraviolet spectrum (insects do) of electrical currents (platypus and hammer head sharks do) of sonar sound (bats do). Incredibly enough though, humans do manifest the first perceptive system (that we know of) which can actually conceive, design and build synthetic representations of these systems (with cameras, metal detectors, radar systems etc.). At last the universe has developed sufficiently complex systems which can themselves develop more sufficiently complex systems. The snowball towards a completely metaphor-ised universe has begun to roll and humans, or more accurately the ever creative human brain, is the momentum building up behind it.

So what of Pi (π)? The infinite, never-ending pattern of numbers destined to bemuse mankind and his descendants for the remainder of the universe. What of it?

It appears to me that the universe, whilst fundamentally accelerating towards a state of its own awareness, has the last laugh at our true simplicity in the digits of π. Contained in that infinity is the information required to build every human mind which has ever existed, to write all narratives conceived by man, woman and child in our brief, fragile history. Not only in π can we better understand the eternal nature of a reality which we help focus to self-perception; in Pi we find the perfect metaphor. An ultimate, absolute schema inherent at the base level of nature. The number π, in its infinity, contains schema for nature's ultimate entity: the circle - perfection, infinitely realised:

...and yet if one were to find the circumference of a circle the size of the known universe, accurate to within the radius of one proton, only 39 decimal places of Pi would be necessary!

From our tiny consciously assimilated, imperfect perspectives, values of π estimated to the 39th digit are by FAR sufficient enough to comprehend the reality our brains are capable of attaining, and yet the perfect metaphor, dear friends, is actually INFINITE...

Can we transcend Pi? Consciousness has a looooong way to go before reality runs out of perceptual shadows on which it can cast its light. And as you ruminate on that (today at 1.59pm and 26 seconds) keep in mind that a priori π has very well been ruminating you in an infinity of possible universes, forever...

Happy n day indeed. Tho I feel our author may be encoding some (not very) hidden messages; it is in fact roughly 210384 hours or precicely (to 6 decimal places) 8765.812776 days since you emerged, full of mischief, from the world inside of your mother into this, our world that you now command. Happy birthday danieru! x

Oops, looks like i missed it by an hour and a half your time- stop being half a world away! we miss you...

Thanks Tim... Indeed March 14th is my birthday, and Einstein's too. Best day of the year

Its not Pi you need to be looking at, its 'primes'.

The number system of the Universe !

This is all entirely skewed info. At the very least you are not acknowledging other irrational numbers than Pie that are just as interesting. There are different versions of math as well; one could feasibly create a formal system where 2+2=\=4. Go to school.