The Memetic Potential of God:
Can Technology be the Master of its Creations?

Thursday, February 01, 2007 → by Danieru
Where does technology end and our idea of God begin?

Human beings evolved to perceive a distinction between 'ourselves' and 'our technology'. Increasingly though, our technological achievements are becoming extensions of our bodies, our identities and our minds, forcing the realm of the human out and into the world of synthetic form. The less obvious technological achievement of language has become synonymous with our development, laying down in its linguistic dimensions the paths which our species was to traverse over the millenia. Yet language's original emergence has long been forgotten, as we all take for granted the extraordinary ability it gives us to project our inner mental states out and into cultural form. Language may be our most treasured technology, but its power is not ours alone to celebrate.

It may aid us in our humility to remember that we ourselves are technological devices:

"...invented by ancient bacterial communities as means of genetic survival - we are part of an intricate network that comes from the original takeover of the Earth. Our power and intelligence do not belong specifically to us, but to all life..."

The human body, therefore, is a multifarious device intended for the procreation of single cell entities, or more precisely, the genes which they employ in their survival. Evolution proceeded, over many millions of years, to shield these genetic terranauts in ever greater layers of complexity. The human body can be better understood as an enormous self-contained ecosystem providing a medium between pure genetic information and the harsh forces of an entire universe. Every machine needs an engine, and we are lucky enough to have several, the pinnacle of which must be the human brain:

"...a three-pound mass you can hold in your hand that can conceive of a universe a hundred-billion light-years across."

This shift of perspective allows our achievements to suddenly be those of the genes within us. Language itself exponentially extended the ways in which minds could interact, forcing human culture into the limelight of evolution and, for the first time in the history of life on Earth, placing the treasure of a species not in its genes, but in its memes. (I will not argue here for the validity or non-validity of 'memes'. I find it difficult to believe that culture did not evolve in some sense, and it is this idea in particular I wish to convey.)

The chimpanzee cracking open nuts with a specific smoothness of stone has a cultural advantage over his brethren. It is not hard to imagine how this knowledge could become a source of power within his social group. Those chimps in the social order for whom intelligent adaptability does not come so easily may find the nut cracking trick impossible to understand, let alone master, and so come under the will of the master nut cracker (i.e. if they want nuts they'll have to be nice to chimps that possess the cultural meme for nut cracking). The technological achievement here can be seen on two levels. Firstly, the obvious wielding of the stone tool, and secondly, the mental form taken by the meme of nut cracking. In lacking a complex language, chimpanzees must rely on their traditionally evolved constitutions - i.e. their eyes, ears and actions - to pass on such information. Humans, on the other hand, have a wealth of technologically evolved communications, something which chimps, were they to understand, would no doubt be enormously jealous of. Our technology is an extension of our ears, our eyes, our language: it allows us to spread our consciousnesses out and into the universe at large. The power of the gene, through the human, is omnipresent: a feature which our idea of God shares. Yet funnily enough, the idea of God appears incompatible with the technology which created it.

Are there memes which technology has no advantage is procreating? One which came to my mind originally was religion, or more precisely the meme of God. One could argue that The Bible, Evangelical Television, the hymn, the chant even The Pope-Mobile are all technologies which mediate the meme of God, but I would have to disagree. One of the fundamental tenets of religious enlightenment is that faith in God transcends the power of will. To truly understand God is so subjective, according to religious teaching, that its manifestation cannot be passed on. Most religions extend the idea that God alone can instill the faith within the human soul. Technology, therefore, appears capable of lubricating the passage of religion (excuse that image), but not in actually translating religious memes from 'soul to soul'. The technology of the gene - for instance the human brain - manifested the idea of God for the benefit of human culture, yet synthetic technology, and in some cases even the technology of language, appears incapable of expressing the meme of God. Something is amiss here. Perhaps, once again, it is our perspective which is in need of shifting:

If one thinks of a particular object, it is easy to distinguish matter from form, and an analogous distinction can be made with regard to organic beings, with form taking on the value of the unity of being and of its individual existence. But if things as a whole are taken into account, transposed distinctions of this kind become arbitrary and even unintelligible. Two verbal entities are thus formed, explicable only through their constructive value in the social order: an abstract God (or simply the idea), and abstract matter; the chief guard and the prison walls. The variants of this metaphysical scaffolding are of no more interest than are the different styles of architecture. People become excited trying to know if the prison came from the guard or if the guard came from the prison; even though this agitation has had a primordial historical importance, today it risks provoking a delayed astonishment, if only because of the disproportion between the consequences of the debate and its radical insignificance.

~ Georges Bataille, Base Materialism and Gnosticism

The very Western tenet that spirit and matter are distinct causes a multitude of perceptual errors, not least in the religious domain. The ascription of a unique identity to ideas and another to the universe at large forces us to separate our minds from reality; our God from our bodies and our selves from our technologies. If the human mind, itself a technological entity, can mediate between the world of form and the world of ideas, then why not our synthetic technologies? Who says a self perceptual device must be organic? Could humans build a machine which manifested The Gods through its remote interface? 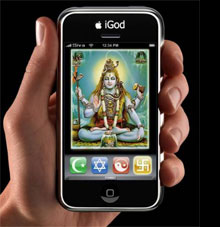 Once neuroscience has pinned down the physical constraints of consciousness, humans will have the ability to treat the human brain as a technology for the first time in our history. By eliminating those aspects of consciousness which mediate the physical world - i.e. sight, sound, fear, identity - science will finally pinpoint the areas of our brains which evolved to manifest religious sensation. Much research has already been done in this area, showing that to enter the spiritual realm one must only be in the process of a particular brain state. What if this state were transplanted into machine form? Artificial Intelligence researchers are already on the road to producing a conscious machine, how much further are they from creating a spiritually aware machine? Would such 'technological' spirituality be indistinguishable from our own? Could such machines be used to offer less spiritually aware humans (such as myself) a glimpse of 'God'? How far away is the pocket iGod? Where is the soul of the machine?

As usual with my meanderings there is a huge amount more I would like to talk about, save for the time and effort it would take me. Scattered amongst the text are various links to articles, research and ideas elsewhere and below are some related meanderings previously expurged on The Huge Entity. Read as much as your technologically evolved brain can manage, but please don't forget to report back here to share your ideas. The memes in your head need a medium to express themselves through. Consider The Huge Entity comments section or The Forum to be that very medium.

Related Past Posts:
• Art, Technology and the Progressive Hand of Human Imagination
• The Symbiosis of Abstract Thought with Hominid Evolution
• Perceiving Infinity: Schematic Portals into The Mind of God
• On the Nature of Seeing and The Act of Creation
• The Metacognitive Dance of Artificial Minds
• Godlike Simulacrum: The Hyperreal Minds of Sentient Machines
• From Animism to String Theory: Forever in Search of Eternal Mystery