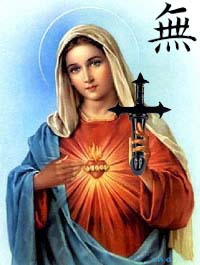 With this in mind, and a love for a multiplicity of nonsense, I have spawned the new:

Huge Entity - Mu-Haiku; all the Haiku, Mu-sense.
Today's topic is inspired by the heathenoid Carnival of The Godless campaign... Blasphemy

Mary was easy.
Had Father and Holy Ghost,
The Queen of threesomes

Submit your own blasphemy themed Mu-Haiku in the comments section, and don't worry, we're already guilty in the eyes of the Christian God:

"...whoever blasphemes against the Holy Spirit never has forgiveness, but is guilty of an eternal sin..." Mark 3:29

Meh, I am not really artistically inclined, nor have I ever tried writing haikus before. Anyway, here's my very first attempt:

A moment of zen
directs a person to see
that there is no god.

There once was a lady from Eden
so fat the whole land was almost eaten
she listened to a snake
felt the earth quake
and finally found sex, fruit, and freedom

sexy crucifix,
The Exorcist showed how to
have holy orgasms

check out the Mu haikus on over at the Carnival of the Godless, there's a lot

Jennyology,
Please keep to the Mu haikus.
Your Limericks aren't.

The cruxifixion
Scene is beautiful, but how
Could God be so.... small?

How can you people hate something so much that is only love?