Mu Haiku: The Impact of Jesus' Testicles
on the Future of Crucifixion Idolatry

If infamy is a viral infection then Jesus is surely the memetic common cold, clogging up the nostrils of civilisation since year nought. This guy was such a fly in the ointment of empire that simply killing him was not enough for the Roman legions. They decided to nail his ass to a wooden cross beam, expose his manhood to the universe, and bar his virginal followers from ever touching his holy person again. Something inside me yearns for a medical exposition of this event:

The actual cause of death by crucifixion was multifactoral and varied somewhat with each case, but the two most prominent causes were probably hypovolemic shock and exhaustion asphyxia. Other possible contributing factors included dehydration, stress-induced arrhythmias, and congestive heart failure with the rapid accumulation of pericardial and perhaps pleural effusions. Crucifracture (breaking the legs below the knees), if performed, led to an asphysic death within minutes. Death by crucifixion was, in every sense of the word, excruciating (Latin, excruciatus, or "out of the cross").

- link to detailed, medical outline and another scientific perspective

If that wasn't enough, recent evidence increases the potential pain of the condemned. Male readers may find biting down hard on a wooden spoon will help them read further:

...Crucifixion methods probably evolved over time and depended on the social status of the victim and on the crime he allegedly committed... 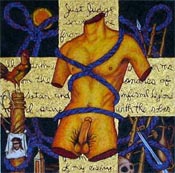 Sometimes he was nailed to the cross by his genitals, sometimes the hands and feet were attached to the side of the cross and not the front, or affixed with cords rather than nails.

"If crucified head-up, the victim's weight may also have been supported on a small seat. This was believed to prolong the time it took a man to die," says the study, co-authored by Matthew Masien, also of Imperial College London's medicine faculty.

Needless to say, the fact that early Christians did not get wind of this development in the crucifixion of genitals can only be a good thing. I wince at the range of gold plated idol jewelry now occupying my imagination. A distraction is in order...

Today's Mu Haiku (if you choose to accept it)...

The impact of Jesus' testicles on the future of Crucifixion idolatry:

How should Christian society put positive spin on the news that Jesus' nuts were nobbled to the cross? A better man than myself might write a Mu Haiku thus:

The Lord said unto
Heaven and Earth: Hallowed be
his holy gonads.


the nuts were stapled

cruelty fastened them there

yet still do we love

When holy balls bled
did Jesus gaze upon his
virgins with regret?

Christianity,
like all good philosophies,
turns out to be balls.

Sooo... was this just about religious intolerance or you actually had some point here? Nevermind...