Mu Haiku: The taste of flesh made modern

Food is fashion these days. A symbol of your 'lifestyle'; a token gesture of the kind of culture and upbringing you were formed from. We adaptable humans eat everything, even substances not considered compatible with our digestive processes are shoveled into stomachs across the world in ever more sophisticated and recombined forms.

As with most deeply significant human taboos, time buried our cannibalistic urges only to have them resurface, reborn through the democratically-shared, social-consciousness that is the internet: 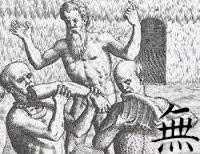 And the world reeled in disgust as though a new horror had been discovered. But before you pass judgement on the cannibal and their inappropriate desire for man-flesh, consider that maybe their actions can be justified under certain circumstances:

... Eating someone who has died in order to survive is incorporating their substance, and it is quite possible to compare this with a graft. Flesh survives when assimilated by someone in extreme need, just as it does when an eye or heart of a dead man is grafted onto a living man. - link

...and once a justification has been found, surely then mankind should assimilate that justification, morph it into new forms. Modern society is ultimately a machine towards homogeny, to simulation. In other words - we shall continue to abhor eating human flesh, but surely to taste it is something altogether different:

Old ones are tough. Young men and women taste better. And babies taste like fish. The flesh is very soft... - link

And so, today's Mu Haiku mission, if you choose to accept it...

The taste of flesh made modern:

How would media spinners and advertising executives turn the unique flavour of human into a brand-able, mainstream product? What place does mankind's most primal taboo have in today's globalised world? Once human taste is free from taboo its simulacrisation is inevitable:

That's my first attempt. Where is yours? It's all a bit too much for some people:

"There is no rational basis for asserting that a human being has special rights: A rat is a pig is a dog is a boy" - link

smart consumers know
nothing is more natural
safer or saner.

I Like the cut of your jibberish boy,
Plusultra
http://plusultrapics.blogspot.com

”I have been assured by a very knowing American of my acquaintance in London, that a young healthy child well nursed is at a year old a most delicious, nourishing, and wholesome food, whether stewed, roasted, baked, or boiled ...”

Swift got it right a long time ago.

Yeah, Swift and child eating. I tend to get peckish in the presence of brats. It could very well be the solution to today's behaviour implosion.

On cold winter nights
Stoke the fire, boil the cauldron.
Have baby for tea.